We are heading for a true adventure: we are visiting the Castle Party Festival in Poland. The reason for this visit is the fact that 5 bands from Solar Lodge label are performing there.

Castle Party describes itself as the largest dark independent festival in Central-Europe. The festival takes place in Bolkow, situated in the south-west of Poland (350km from Leipzig). The castle has been the location for this festival since 1997. The trip to Bolkow is definitely worth your while. This festival distinguishes itself from other festivals by their line-up, the atmosphere at the festival and in the village, friendly people and the fact that there’s a good selection of food and drinks. And last but not least: the scene of the castle on the top is magnificent.

The festival is well-organised with merchandising and a loose atmosphere. You can reach the festival by walking on the hill towards the castle. Each year more and more visitors find their way to the festival. For this reason hotels and B&B’s haven’t had any vacancies since months before the event.
You can get to Wroclaw/Brislau by plane several times a day. The rest of the journey you can do by public transport. We would recommend doing the trip by car so you can explore the area around the festival.

For the Solar Lodge label this festival feels like coming home: Garden Of Delight has been there already 3 times and Merciful Nuns is playing there for the 3th time. The bands playing this year are Near Earth Orbit, Whispers In The Shadow, Aeon Sable, Merciful Nuns and The Devil & The Universe. So, it feels like a Polish gathering.

REPORT :
Thursday morning 11/7 starts early: after a solid breakfast we are heading towards the festival. We are exploring the location and strolling in the village. There are two locations on the festival: The Castle Mainstage and a stage inside, The House Of Culture.

The festival starts on Thursday on the small stage around 17:30. In the evening there’s the Artificial-Intelligence show by NEAR EARTH ORBIT, the headliners for that evening. 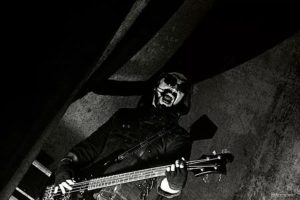 In 2016 N.E.O. already played in Poland: End Of All Existence broadcast. This time we get the new Artificial Intelligence (A.I.) broadcast. Lights went out at 22:30, the big screen and 2 tv’s flash on. The dark and fog is on stage and we feel the bass through our body. N.E.O. will bring us a soundtrack of 10 tracks and 3 encores. The people are staring to the wide video screens and listen to the spoken words of Artaud.  Ashley is hitting the stage with a theatrical performance, while playing the guitar at his best. It’s all about machines in our nearest future. Starting with Deus Ex Machina and Nine Billion Names Of God (raw, industrial sound), over to Singularity (spheric) and Lucifer Rising. There’s a good balance between screens and lights. New visuals, drones capable of doing precision attacks. The audience feel the danger of advanced technologies and it’s transfixed by the lecture that it forgets to clap or move. 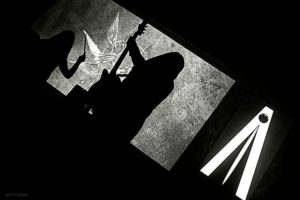 Artaud on bass, Jawa on e-drums and Ash on guitar. Artaud shouting: “A.I., and you had thought that would make us feel safer? No, it doesn’t.”
It’s a very loud mix of sound, visuals and lights. Can you hear the machines…. We get lost in the apocalyptic sound of the project called Near Earth Orbit. A visual trip for all senses.
After the A.I. broadcast, people are dancing on Trans Neptunion Objects, Planet X as encores. The apocalyptic sound of N.E.O. was a blast people told us.

Some comments : A.I. broadcast is amazing, I was staring to this ….. I’ve never seen such a performance….The first part (A.I.) was magnificent!

Friday morning 12/7 starts with bad weather. Around noon we arrive at the city of Bolkow. We went to eat and drink something. This will be the first day the Main Stage will be open. Not much people are on the road yet, due to the bad weather. The festival starts at 16:00. Today we get Whispers In The Shadow / Aeon Sable / Merciful Nuns.

When we go to the festival around 16:30, the sun starts to shine. We arrive at the Castle Main-Stage.

At 18:00 sharp the organizer starts some introductory words for WHISPERS IN THE SHADOW. The Whispers played here already in the years 2001 and 2013. Beautiful dark rock melodies, emotional lyrics and guitar sound by Ashley are some ingredients. The show starts with A Rhythm Called Zero. “Hello again!” Ash says to the public and The Urgency Of Now of the new album comes along . The sound is good and The Whispers play a gothic-rock setlist. Here comes the sun and we hear the Morning Falls. Ashley is in a good mood. Talking to the public like: ‘dziekuje’, this is the only word I know in Polish and of course Piwo. We all know he adores David Bowie. So we get the song I’m Afraid Of Americans and at the end the spoken words: “The message was clear, wasn’t it?” It was a good gig, Lazy Schultz concentrated on the guitar, Fork on bass and drums, Martin on the guitars and synths and Alex on the drums.

Setlist : A Rhythm Called Zero / The Urgency Of Now / Morning Falls / If Uriel Falls / The Lost Souls / The Tempest / A Song For The Radio / The Rat King / Detractors / I’m Afraid Of Americans / Back To The Wound / Damned Nation

Up next was AEON SABLE. In the official festival mag there was an interview and good looking advertisement for the band, so we were quite excited. Poland is ready to welcome the band. At 19:10 they hit the stage ….. “Are you ready for some Visions?” Nino was shouting. Nino is wearing a Thelema shirt and he’s in a good mood. The sound is superb and the band is playing well. Din-Tah is very concentrated. Jo on the guitar and Quoth on the bass. The crowd cheers and applauds. They sound amazing together. After Visions (Tarot card stays on stage) we get Burn For Salvation from their latest album. Nino is dancing on stage , the sun hits the stage and Nino is wearing his sunglasses again. Quoth is screaming loudly: ‘Salvation’.
They have fun on stage and they are playing amazing, even in daylight. The audience is singing along and around me I see a lot of Aeon Sable shirts. Nino is smiling the whole time ….. So it’s time for some dancing ….. Dancefloor Satellite is coming up.  Garden Of Light is dedicated to Frater Fidens. “Wherever you are, Pat. This song I wrote with him, this song is for U ….” After 7 songs we end with outstanding Praying Mantis . ….. We end with Nino at his best. The climactic songs with Nino lying on the floor screaming ‘my suicide walk ‘…..

At the Solar Lodge Merchandise people are coming to Aeon Sable to have a talk and a picture with the band members. All we can see are happy smiling faces and the band is enjoying their Polish trip . They proved they can play even in daylight. Well done, guys! Trip the light fantastic even in daylight!

Final gig for us that day: MERCIFUL NUNS. They were already at the Castle in 2012 and 2015. The organizer did a short announcement and they hit the stage at 22:30. “Sarru Mass and welcome Poland” Artaud says …. Neo Alpha Genesis is starting with the visuals ‘symbol‘ of Freemason. The Merciful Nuns takes us on a dark journey from Cremation – Body Of Light to Eternal Decay …. The Director Of Ceremonies takes the microphone in the middle and Jon en Jawa, on the left and right side.  Wide screens showing us symbols, lyrics in a perfect combination of lightning. Ultraviolet, with huge violet lights on stage and the castle. Magnificent! The setlist is rockin’ occult post goth. The sound is massive with grooving bass from Jawa. Everything is dark and there is a goth atmosphere in the castle. And even during The Maelstrom we had a growing moshpit. At the end we got The Pyramid, Artaud says some words and sits back down…. People can see the words on his jacket : The End!
It was a brilliant concert. Perfect lightning and visuals and seeing Merciful Nuns on the Castle …the audience is thrilled! It was blacker than black! For me, it was one of their best gigs they’ve played! For sure, Poland adores The Merciful Nuns.

Saturday morning 13/7 again with rain during the day and late evening.

Time for some Goatpower. THE DEVIL & THE UNIVERSE at The House Of Culture. We didn’t see the concert because we did the merch for The Goats.
This was another great experience! Never seen people so excited about The Devil & The Universe. At the merch people were buying already their Goat stuff in the afternoon. From cd’s to shirts. They were talking about the show in the church they did 3 years ago (2016).

People were thrilled to see The Devil & The Universe. They hit the stage at 20:50. It was the first date from The Dream Machine Tour: Endgame 69: album. I only saw the first 4 minutes of the show (Gimme Shelter ( Rolling Stones, Altamont Festival ) as intro ) and had to go back to the merch because people were buying all over and over. I could hear Satanic (Don’t) Panic, The Church Of The Goat. People couldn’t enter the venue anymore!!! If you weren’t there in time, there was no chance to see them. Security was above to keep the crowd under control. If they should play Castle Party in the future, they should play on mainstage. After the concert Stefan and David took some time to sign cd’s, talk to fans and take some pictures.

Everybody agrees this was a Goattastic gig they played! Poland adores The Goats!

Sunday morning 14/7 we hit the road back home. Tired as hell but satisfied!

While we’re waiting for the next one to arrive ……

„What if life did not originate on earth?“ – Mit dieser Frage eröffnet das 11. Album…

„What if life did not originate on earth?“ – Mit dieser Frage…

Many things, emotions, events, states of mind inspire us. Often these are…

„What if life did not originate on earth?“ – Mit